Voynich Manuscript is an ancient manuscript that was discovered by Wilfrid M. Voynich in 1912. It has since then been considered as one of the Most Mysterious Manuscript in the World. Till date no translation has been possible for what probably is a medieval artifact. While some researchers have condemned it as a hoax while others believe the manuscript is written in a coded cipher. There are various paintings made on the body of this ancient manuscript. Study of the pigments and vellum used in these drawings revealed that they dated from the 13thcentury. The manuscript is small in size but it is thick with 235 pages.

Paintings and Writings on Voynich Manuscript

The language used to write the Voynich manuscript is unrecognisable. There is no instance of such a written language in the world. The mystery surrounding this manuscript has been intensified with the drawings made on this manuscript. There are drawing of weird plants and flowers which are from some other world according to the researchers. There are astronomical charts provided in the manuscript that resemble objects seen through telescope. In another section of the Voynich manuscript there are images of living cells seen through the microscope. There are strange images of men and women with rubbish bins in their hands. 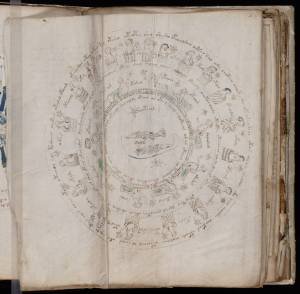 Intensive studies have revealed that the manuscript dates back to the 15th or 17th century Europe. But when translation attempts were made on the manuscript they bore no fruit. None of the language specialist could find any instance of such written language in any part of Europe or for that matter in the world. The text has no corrections on it but there is use of two sets of language in it. The manuscript is written in more than one scribe which the researchers believe is common for coded messages.

There are other theories suggested by the linguists for the Voynich manuscript. Some feel they were written in spoken languages which were never used for writing such as Enochian or Balaibalan. Others believe that the manuscript was written in abbreviated Latin or phonetic script of Chinese. Renowned scholars and translators from all over the world have studied this manuscript and failed in their attempts to decipher the code.

In the present times some researchers are claiming the images in the manuscript together with its anonymous script bear testimony to their alien origin. Indeed such a possibility might not be ruled out.