King Edward II was probably one of the worst kings of England. He was the son of Edward I who was a revered leader. Edward I has crushed revolts in Scotland and subdued Wales. Edward II was the only healthy son of the King. Three previous sons had all died in their childhood. Edward II grew up in the shadow of his great father and had a particular fondness for servants and other lower born. He was more eager to follow men rather than lead. Piers Gaveston, the son of a Gascon knight who was raised with Edward II was someone he followed. Many researchers feel that fondness between Piers and Edward II was a homosexual relationship. When Piers was killed by other barons Hugh le de Spensers became close to the king.

Queen Isabella of France was not satisfied with her marital life with Edward II. He paid more heed to his male friends rather than her. So she started plotting against the king after having four children from him including sons Edward (who went on to become Edward III) and John. She looked to overthrow her husband with aid from her lover Roger Mortimer. When Edward III was 14 years old Isabella raised the French armies and defeated Edward II. He was imprisoned and kept at Kenilworth Castle and in January 1327 he was forced to abdicate to Edward III, with the real power vested in Isabella and Mortimer. On April 3, 1327 Edward II was moved from Kenilworth to Berkeley Castle under the custody of Thomas de Berkeley and John Mautravers. He remained there till September 21 of that year. But the living former king posed many threats to the new regime. There were at least two rescue attempts made by the conspirators. On both times Edward II was recaptured and the conspirators were put to an end. But Roger Mortimer learned of another rescue attempt from William Shalford. He wanted to put an end to these rescue attempts, so he ordered secret murder of the former king. 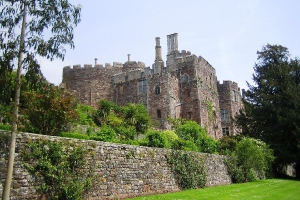 There were strict orders provided that the nature of Edward II’s death should seem natural. According to the popular stories it is learned that Edward II was woken of his sleep in the middle hours of the night and a hot poker was inserted into his anus so that no signs of murder were evident. Edward II was perceived as a homosexual and thus there would be no eyebrows raised. Such a description is provided in a set of chronicles known as Brut. But Adam of Murimuth states that he died of suffocation from a pillow. This was a much easier process to kill a person without any trace of murder.

Hot Poker was inserted into Edward IIs anus to kill him

But the story of Edward IIs murder was widely excepted for many centuries but recently researchers have raised doubts as to when he was killed and whether he was murdered or lived on. The mystery has arisen out of the Fieschi Letter which was discovered in the late 19th century. The letter claims that Edward II was transferred from Berkley Castle where he had stayed for nearly 11 years. He later crossed over to Ireland and stayed there for nine months. Edward II later left for France disguised as hermit and was even received by the pope. This is an astounding piece of evidence. Researchers feel that once Edward II was dead to the public eyes he was not a threat to the throne. General masses were too dissatisfied with his administrative qualities and would never want him back. So it may be true that Edward II was only proclaimed dead to silence the conspirators. What is certain about Edward II is that no trace of him was found after September of 1327.