Kohinoor or the Mountain of Light was the first word that escaped the mouth of Nadir Shah when he saw the diamond. In fact the Kohinoor has a spell binding aura and the Iranian invader could not avoid its charm. It is one of the heritages of India and it is a pity that our rare gem now decorates the crown of the Queen of England. The original shape and size of the Kohinoor have also been lost. The diamond was cut into two pieces – while one part is placed in the Queen’s crown, other part lies somewhere within the British treasury. 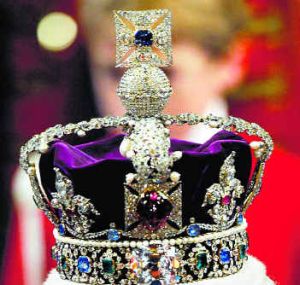 The history of Kohinoor is shrouded with deep veil of mystery. Kohinoor exchanged many hands before it landed up in the hands of the Brits. Though Kohinoor is known as Mughal Diamond, but one theory suggests it was found near River Godavari during the times of Lord Krishna. It belonged to the Mahabharata character, warrior Karna. But contradicting theories state that this diamond was found in the mines of Golconda while others feel Kohinoor came from the Kolar mines of Karnataka.

Kohinoor is the most coveted gem stone in history

The story of the Kohinoor is very marvellous too. The Kohinoor was possessed by the Rajas of Malwa for many centuries through their lineage. It passed on to Allaudin Khilji when he became the Emperor of Delhi in 1304. Kohinoor belonged to the following rulers of the Tughlaq and Lodhi dynasty. After the heydays of Delhi Sultanate the diamond was grasped by Timur in 1339 who took it back with him to Samarkhand. It remained nestled there for three centuries, until it was brought back to India by Babur who was a descendant of Timur. Some other records from those times suggest that the diamond was with the Raja of Gwalior who had managed to get it from the Delhi Sultans. He presented it to Humayun in 1526 after the Battle of Panipat. Another set of documents suggest that Kohinoor was with a diamond merchant named Mir Jumla who had discovered it from the Kolar mines and later presented it to Shahjahan in 1639. Though this theory is largely debunked.

Timur took Kohinoor out of the country to Samarkhand

Whatever might have happened before, it is confirmed that Kahinoor was a part of the loot that Nadir Shah took to Iran from India in 1739. He gave the diamond to his son Ahmed Shah Abdali of Afghanistan. It remained out of the country till Shah Shuja, the king of Afghanistan passed it over to Maharaja Ranjit Singh in 1813. 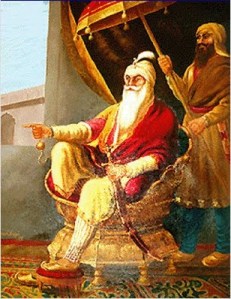 There is a whole new story about how Kohinoor got to Maharaja Ranjit Singh. Ahmed Shah Abdali had three grandsons – Shah Zaman, Shah Shuja and Shah Mahmud who dreamt of becoming the next Emperor. But upon Abdali’s death the reigns passed over to his Shief Minister Wazir Fateh Khan who favoured Shah Mahmud. Mahmud in his turn blinded his brother Shah Zaman. Shah Shuja took over his blinded brother’s responsibilities. Soon he ousted Shah Mahmud and became the king of Afghanistan. But Fateh Khan was able to regain power and put Shah Mahmud back upon the throne. Shah Shuja lost his power but kept the Kohinoor and gifted it to his wife Wafa Begam. But Mahmud wanted the diamond and Shah Shuja was imprisoned in Kashmir. In her bid to rescue her husband Wafa Begam sought help from the Sikhs. She promised Maharaja Ranjit Singh that she would present him with the Kohinoor if Shah Shuja was returned safely back to her. Sikhs managed to rescue Shah Shuja albeit at the loss of many lives. After a little reluctance Kohinoor was handed over to Maharaja Ranjit Singh.

After the annexation of Punjab following the second Anglo-Sikh war in 1849 Lord Dalhousie confiscated the property of the Sikh Empire. The Kohinoor fell in the hands of the British East India company. The diamond was sailed to Britain, never to return again, and presented to Queen Victoria.

Since then the Kohinoor has stayed in Britain despite of many claims by Indian government to hand over this rare diamond.

45 thoughts on “The Real History of Kohinoor”