So, 300 of Sparta’s bravest soldiers all having living sons to continue their family legacy were chosen for the battle. Everyone knew they were moving to certain death. The Spartans were reinforced somewhat with some Thespian and Theban soldiers. For the next two days the Persian army did not move forward they wanted to overwhelm the small band of Spartans. Contrary to Xerxes’ hopes the Spartans did not flee.

Military Formations for Battle of Thermapylae

On the third day Xerxes ordered his five thousand archers to fire a barrage of arrows at the Greeks. But this caused no damages. Then he sent a troop to take the Greeks and Leonidas as prisoner and bring them to the King of Kings. This attack caused severe damages for the Persians. It is said that Greeks killed so many Persian soldiers that Xerxes stood up three times from his seat from the place he was watching the battle. Then there was a second assault where the Immortals, an elite corps of 10,000 men were sent. But this attack also failed to make any headway.

On the fourth day, Xerxes under the misconception that Spartans and Greeks had been weekend by their injuries sent another infantry to attack. Again it caused severe losses for Persians. Xerxes grew so frustrated that he stopped the assault and withdrew to his camp. As he was pondering a way through a Trachinian traitor named Ephialtes informed Xerxes about a mountain path around Thermopylae.

Persians found no way through Greek defence even on Fourth Day

On the fifth day, Leonidas found that they were outflanked and surrounded by the Persians and loss was imminent. He ordered the Greek armies to retreat and decided to stay on along with his 300 men. But a group of 700 Thespians and 300 Thebans also stayed back. On their next attack Persians managed to kill everyone, although the Persians too had their casualties. It is learned that King Leonidas fought on till the end. He was surrounded and killed by the Persians. On receiving the news of Leonidas’ death Xerxes ordered his soldiers to bring the head of Leonidas and hang it on a perch. But the King’s body was guarded and taken back home for a funeral. 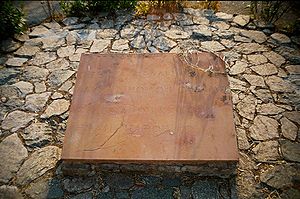 Thermopylae Memorial to Remember those 300 martyrs

So the Spartans were able to resist Persians for five days with their bravery. These five days were very significant. It allowed Greeks to evacuate their cities and consolidate the army. It is learned that when Xerxes eventually set foot in Athens he found an empty city. With their lives King Leonidas and his famous 300 helped save lives of a large Greek population. King Leonidas’ name has stayed immortal in the annals of Greek history for his sacrifice.

One thought on “Battle of Thermopylae and Leonidas’ 300”