King Valerian is one of the least known Roman Emperors. He is also considered as a disgrace to the mighty Roman Empire. He is famous for being the only Roman Emperor to be captured by a foreign enemy and died as a result of exile. He is put in a list of failed Roman emperors.

Valerian was born around 200 AD. There is little known about his early life apart from the fact that he was a consul and high ranking member of the Senate in 238. He was married to Egnatia Maririana and had two sons. He was an ally to both Emperor Decius and Trebonianus Gallus. The later was declared king after Decius was killed by Goths in the Battle of Abrittus. Two years later Gallus in turn was threatened by Aemilianus who was a usurper. Gallus called upon Valerian who rushed to rescue the emperor but he was too late for Gallus had already been overthrown and killed before he arrived. Aemilinus reigned for even shorter duration; his army mutinied and killed him before he could face the rebel armies of Valerian. Soon Valerian was the new Emperor of Rome at the age of 55. First act of Valerian was to alleviate his son Gallienus as a co-Emperor. Valerian was a traditionalist and sanctioned the persecution of Christians throughout the kingdom. 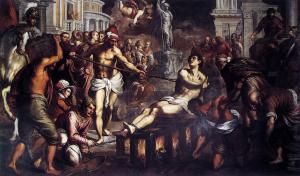 Christians were executed under orders from Valerian

Valerian was not good in battles too. His Roman army failed against the Goths and Persians. Their strategies were ineffective against the enemies. Other enemies had great success with their hit and run tactics. They used to invade, pillage and then retreat before the Romans could come with reinforcements.

In 259 there was a new invasion form the Empire of the East imminent. This invasion was being planned by Shapur, the leader of Sassanid Empire (covering Iraq, Iran, Afghanistan and some frontiers of India). Though Valerian marched forward with his Roman army but his soldiers were in no shape to fight due to diseases and mutiny. So, Valerian sought to make peace with Shapur. There was a meeting arranged between the two rulers. However, this turned out to be a trick by Shapur and Valerian fell into the trap. He was captured by Shapur and taken back to Persia in chains. 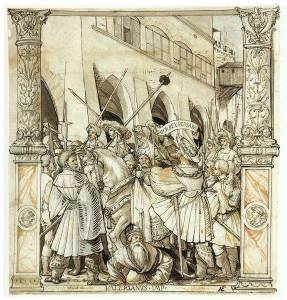 There are various stories about what happened to Valerian in Persia. One story claims that Shapur used Valerian as a footstool while mounting his horse. This was a sign of his supremacy which made felt every day. Shapur was so proud of his triumph against the Romans that he had reliefs of both Velrian and him carved at Naqsh-i-Rustam near Persepolis. In this relief Valerian is shown in a submissive posture on his knees and Shapur on his horse.

It is said that after some time when Shapur had had enough of embarrassing Valerian he killed him and had his body stuffed with straw and exhibited in a Persian temple.

One thought on “King Valerian and his Disgrace”