Cambyses II was the son of Cyrus the Great and a King of Kings of Achaemenid Empire. After conquering entirety of Middle East Cambyses II planned to invade Egypt, Psamtek III was the Egyptian Pharaoh ruling Egypt during these times. Cambyses II had the support of many Arabian chieftains and had Greek alliance. When he marched against the Pharaoh result was inevitable. Psamtek III was soon defeated and executed. But the priests from the Temple of Amun refused to legitimise Cambyses II as their ruler. This enraged the Persian king and he sent 50,000 soldiers from Thebes to attack the Oasis of Siwa. There were orders to destroy the oracle at Temple of Amun. They walked along the desert for seven days and reached an oasis. This was believed to be El-Kharga. After reaching this place they were never seen again.

Are these remains of lost Persian soldiers?

As Heredotus described a strong wind arose and it brought along columns of whirling sand. The sand covered the troops and they disappeared. With the passage of years the tale of Cambyses II’s lost army faded away. Many believed it to be a mere tale as there was no trace of the soldiers ever found.

Soldiers had set out to destroy the Temple of Amun

But in 1996 a group of researchers investigating presence of iron meteorites near Bahrin (a small oasis near Siwa) stumbled upon some half buried pots and many human remains. There were bronze weapons, silver bracelet, earring and many human bones found in the area. These remains could be of the 50,000 soldiers who were buried in the cataclysmic sandstorm in 525 BC. The researchers observed a rock which was the largest in the area. This could be an ideal shelter during any sandstorm. On surveying the place with metal detectors they found the rare relics of Persian army. 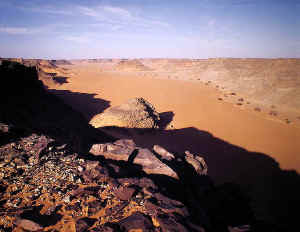 Soldiers traveled across the sand of Gilf el Kebir

On further studies it was confirmed that the army did not take the take the popular caravan route via Dakhla Oasis to Farafra Oasis. All search for this lost army conducted earlier has been along this popular route. So there were no results found. The army had taken a westerly route from Gilf El Kebir to Wadi Abd el Melik while heading towards Siwa. Such a route would help the Persians catch their enemies unaware as the route through the oasis had Egyptian control. To support this hypothesis there were various water resources and artificial wells found all along this new route. These water resources would have made march through the desert much possible. When the soldiers were close to their location they faced a sudden sand storm. While some soldiers found refuge and took shelter, others dispersed to various directions.

Some Lost Relics unearthed from Bahrin

The site had been looted for many centuries and almost all priceless possessions were lost. But the researchers found bits of a Persian horse and some arrow heads. Such a finding may instil new life in the quest for Cambyses II’s lost army.