Exodus is perhaps the greatest salvation event mentioned in the Old Testament. There is no wonder then that Hollywood has over the years exploited the event to come up with movies that have captured our imagination. Exodus was the redemption of an entire nation and it was led by Moses. The Bible was a beautiful baby and a handsome young man. When he passed by, he used to attract stares. This is why the Bollywood actors playing the role of Moses have such remarkable features. But the Pharaoh, who is a villain in the plot, has been played by actors with imposing muscularity. But if we hold that Ramses was the Pharaoh of the Exodus then the casting was inappropriate. Ramses was barely 5 feet tall. The description of International Standard Bible Encyclopedia (ISBE) does not match with Ramses at many points. In fact it does not fit any of the Pharaohs from the 19th Dynasty. The sole reason that people Ramses as the Pharaoh of Exodus is because Bible states: children of Israel built the cities of Ramses and Pitham. Apart from this there are no other resemblances of Ramses with the description in Bible. This lack of resemblance can be simply clarified by: the writer of the Biblical paragraph used the name of the city in his own time and not the unused name.

Moses Led Israelites out of Egypt in 1450 BC

Getting the Facts Straight

To search for the real Pharaoh of Exodus it is important to get the facts straight. It is mentioned in the Bible that:

Now let us focus on finding clues from these three key facts. The final point helps us pin point the timing of Exodus.

Mummy of Thutmose I, the Cruel Ruler

As per the third clue we can assume that 4th year of King Solomon’s reign which is “480 years after the Israelites came out of Egypt”. Setting this as a benchmark let us try and do some math. The fourth year of King Solomon’s reign means 968 BC (may give or take a year). Now we need to add 480 years to 968 BC and it gives us 1448 BC. This means we have a match, as ISBE states the Exodus happened around 1450 BC.

As per the first clue we need to have a dead Pharaoh with a dead first born to fit the Biblical description. Do we have any matches?

We will return back to the calculations. But let us first take a closer look at history. The Bible states that Moses was 80 years old when led Israelites out of Egypt. This means Moses was born around 1530 BC (add 80 to 1450 BC). This means Moses was born during the reign of Thutmose I, who was a cruel ruler. The character of Thutmose I is perfect for him to decree the killing of infants. He was a very cruel ruler who showcased the head of Nubian King on the forward most part of his barge. He had a fear that the Israelites would overrun his country. It is mentioned in the Bible that the count of Israelites was growing faster than the Egyptians and they were more than 2 million in population when the Exodus took place.

It is mentioned in the Bible that the daughter of a Pharaoh, Thermuthis was taking a stroll down the river bank when she saw a basket float by. She asked her swimmers to retrieve the basket and within it was a beautiful infant. Thermuthis named the child Moses which in the Egyptian language means “saved from water”. Hatshepsut was mentioned as Thermuthis as people back then tended to align themselves with some form of animal gods. Thermuthis symbolizes the Serpent God who is a protector, provider and nourisher of every infant. Hatshepsut’s character matches perfectly with the description of Pharaoh’s daughter mentioned in the Bible. She had a kind heart and held every Egyptian not above or below her.

When Thutmose I died Hatshepsut’s brother ascended on the throne as Thutmose II. She was married to her brother. But Thutmose II lived 3-4 years after the marriage. After Thutmose II’s death Hatshepsut wanted Moses to be the next Pharaoh, but he was too young then. Apart from this the Pharaoh had a son of a commoner called Thutmose III. As Thutmose was too young to rule, so Hatshepsut became the interim Pharaoh. Under her realm Egypt saw exponential growth. There were great constructions everywhere. When Thutmose III grew older he became the co-regent and ruled side by side with Hatshepsut. While Thutmose III was responsible for the military affairs, Hatshepsut looked through the domestic affairs. It is learned that Hatshepsut always had a special place for Moses and this made Thutmose III hate her. When Moses was convicted of killing Egyptian, Thutmose III did not have the slightest hesitation in decreeing a death order for Moses. So, Moses fled and did not return for another 40 years.

When Moses returned at the age of 80 years, Thutmose III was the sole Pharaoh. Thutmose III had started a campaign to demolish all buildings constructed in the reign of Hatshepsut and wipe her memory from history. Though, his work was halted by untimely death. 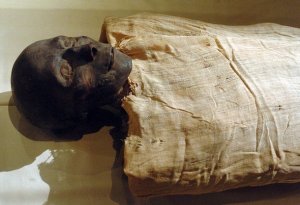 Putting Together the Pieces

It is interesting to note that, as per historical accounts, Thutmose III dies around 1450 BC same year as Moses turned 80 and happening of Exodus. So, the timeline perfectly fits Thutmose III as the Pharaoh of Exodus. He might have died chasing the Israelites.

In the annals of history it is recorded that Amenhotep II and Thutmose III co-ruled Egypt for two years and it is during this tenure that the Exodus took place. Thutmose III died and his grandson was the first born child to pass away.

2 thoughts on “Who was the Pharaoh of Exodus?”