The name of Mycenae still lives on among us courtesy to Homer’s two brilliant epics. Mycenae is mentioned to be the kingdom of Agamemnon, a key figure in the epics. But Mycenaean civilization was a revered name before times of democratic Athens or conquests of Alexander the Great. But there are many mysterious regarding the fall of this great civilization. The time before Greek Classical era is generally conceived to be a time of myths than reality. But recent evidence has suggested that the descriptions of Mycenae were true. This was a civilization that reared up its head from nowhere. The civilization was known for its outstanding constructed which were reflected in the palaces of the times. They are said to have established trade relations with many centers in the known world. They were a prominent kingdom that waged wars and conquered many of its neighbors. But the society that had everything it needed suddenly vanished towards the end of Bronze Age of Greece. Whether it vanished all of a sudden or faded slowly is not known.

The Greek Bronze Age lasted from 3000-1200 BC and it is the historical backdrop for Homer’s two epics. The stories of Gods fighting alongside humans and other myths made people think of the period as purely mythical. But in 1872 Heinrich Schliemann discovered a walled citadel which was later identified as the city of Troy. Inspired by the last discovery, Schliemann came back four years later to find the fabled city of Mycenae in Southern Greece. He was able pin point a location based on the ancient texts and found the city that Agamemnon ruled. The city was filled with lavish tombs, palaces and gold. A golden burial mask was also discovered that is believed to have belonged to Agamemnon. So, Mycenae came out of the realms of fable into stark reality. Evidence was also found that supported Mycenae’s role in shaping the Greek history.

A Civilization out of Nothing 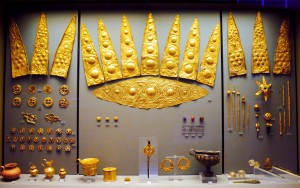 As mentioned before Mycenaean civilization came to life all of a sudden in Southern and Central Greece near 1600 BC. They developed into an envious civilization virtually out of nothing. Some of the present day scholars believe that the neighboring Minoan civilization contributed significantly to the development of Mycenaean civilization. The trade relations between Minoans and mainland Greece began in 2000 BC and this relationship was the key in development of Mycenae. The Minoans nourished and trained the infant civilization with their knowledge. Before coming up as a prominent civilization, Mycenae was constituted of a group of tribes. The Minoans helped bring all these tribes together. Minoans seem to have transported entire societal structure to Mycenae. The Mycenaean’s were glad to adopt the culture, writing system, city-state model and architecture from the Minoans. The resemblances between both these civilizations were so striking that some researchers held that Mycenae should have been conquered by Minoans and this idea was accepted for many decades. It was only in the late 1950’s when a British linguist was able to translate the tablets from Mycenae that the truth was revealed. It was seen that though Mycenaean population used the Minoan writing system but they used Greek language in it. So, if the theory at all has to be put in place, then it was the Mycenaean’s that attacked Minoan’s. It can be a logical explanation as to why the great Minoan Palaces were all burned to ground in 1490 BC. So, it seems that the civilization that owed its origin to the Minoans went against them and invaded to capture Crete. 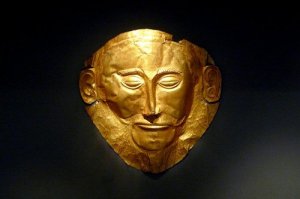 In 1300 BC the Mycenaean Civilization reached its peak. It was one of the most dominant empires in the Aegean region. But it is strange that they vanished from history only in the span of another hundred years in 1200 BC. Something led the Mycenaean palaces which were still functioning and filled treasure to be vacated and the towns and villages to be burned to ground. The population scattered to other parts of Greece. But Mycenae was not the only civilization to suffer during this time. Much of the Mediterranean regions were facing turmoil and the kingdoms of Italy, Syria and Anatolia were also destroyed by some menace. There was probably a band of unknown who were capturing land after land. Egypt was the only civilization that could repel these invaders. The Egyptian texts mention these invaders as “men from the northern lands” or “people from the country of seas”. 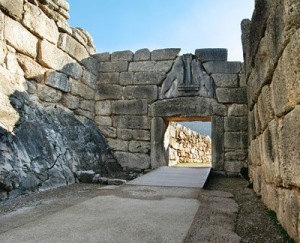 This has led to the first theory regarding the disappearance of Mycenaean civilization. Theorists believe that there is strong evidence that the civilization was functional even in its last days. Now, couple this with the concept of unknown invaders. The weapons and military artifacts indicate that Mycenaean people were superior in military technology. Only they could have tormented all the kingdoms of Mediterranean region and led a campaign to Egypt. It is believed that Mycenaean kingdom captured whole of Greece and they scattered all over the country. The culture of this civilization formed the basis of later Classical Greek culture. 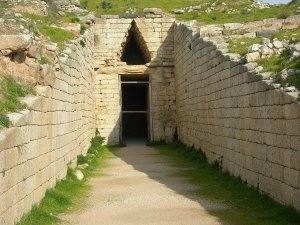 Ruins of a Mycenaean Palace

There is also a second line of thought. Some researchers feel that the Minoans had bonded people from different tribes to form the prominent Mycenaean civilization. With wealth and power the bonding fell astray, as a result of which there were civil wars and assassinations. The societal system became corrupt and the civilization gradually faded. The populace slowly spread to other parts of the world and were accepted for their knowledge and technological superiority.