Napoleon is one of the revered figures in history known for his military and people skills. He ruled France with pomp and grandeur and expanded it beyond the expectations. Napoleon was born on the island of Corsica and he quickly grew through the military ranks to become the Emperor of France in 1804. During his reign, Napoleon controlled most of Europe and expanded French colonies elsewhere. During his decade long rule he was defeated, exiled, escaped prison, reclaimed his throne and then finally defeated by the British at the Battle of Waterloo. He was exiled to a small Atlantic Ocean island named St. Helena. He died after being six years on the island in 1821.

Ever since his death, there have been suggestions of foul play. Though original autopsy by the attending doctor suggested that Napoleon died from acute stomach cancer, but most of his loyal supporters believed that there was a conspiracy. The theory was given vigor when in 1961 samples of the ruler’s hair showed they contained arsenic. Which would suggest that Napoleon died of slow poisoning. This could be a valid theory. If Napoleon escaped his exile, he could again change the balance of power in Europe. On the other hand, many upper ranked French aristocrats would also benefit from Napoleon’s untimely death. So, speculations of murder were not too illogical. 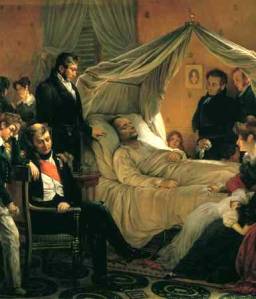 To unveil the mystery, a group of medical experts examined the case of Napoleon’s murder closely. The team analyzed writings of Napoleon’s doctors, his family medical records and some eyewitness accounts. In all the testaments there was nothing mentioned that would suggest arsenic poisoning. There was no account of hemorrhaging inside the heart. On the other hand there were strong suggestions indicating that Napoleon had in fact died of stomach cancer. The doctors had reported symptoms of gastric cancer such as: loss of weight and stomach filled with grainy substances (that suggests gastro intestinal bleeding). Doctors have also detailed on a large lesion that existed on the stomach of Napoleon.

After cross referencing the doctor’s accounts with modern pictures of gastric cancers, the researchers reached the conclusion that Napoleon had indeed died of acute gastrointestinal cancer. He had a huge mass within the stomach right from the entrance to exit. The mass was at least 10 centimeters long. The researchers explained that the arsenic found on the hair of Napoleon was caused by the crude hair products used in that era. The hair products in those days had some remnants of arsenic in them.

The researchers also suggest that this cancer was caused due to two major reasons. First reason for his medical state could be genetic predisposition. Both Napoleon’s father and sister had died of cancer. Another reason could be lack of proper food diet. During his reign, Napoleon waged many wars and during these campaigns he would be deprived of fresh fruits, vegetables or meat. This in turn made him ideal candidate for stomach cancer.

So, many decades long mystery over the real cause of Napoleon’s death has been finally solved. The great emperor who was out to conquer the world, was killed by stomach cancer.