Every nation wants to be the greatest nation in the world. Historians grab every possible opportunity to glorify their nation. Often history is molded and real facts are twisted to showcase a nation’s glory. As a child I studied about Alexander the Great and his invasion of India in 325 BC (give or take a couple of years). In the Indian historical texts it is depicted that Alexander was overwhelmed by the character, valor and military might of Indian kings. His conviction was further fortified after meeting Porus and Chandragupta Maurya. It is said that he returned Porus his Kingdom and befriended young Chandragupta. He left hopes of conquering this great nation and returned back home.

Sculpture of Alexander the Great

Alas! Truth is far from these golden phrases. Alexander the Great was a highly ambitious man. He was cruel in a way too, because no great conquest can be carried out without a bit of cruelty. Apart from this the person who had conquered great Empires many millions away from home cannot be overwhelmed by a single battle or meeting a youthful talent. So, what was it that propelled Alexander to halt his war machines and turn back towards his native land? 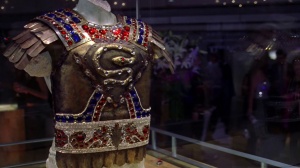 In 336 BC, Alexander ascended to the Macedonian throne after the death of his father Phillip. In the initial days he spent time in consolidating his position as the King of Macedonia by crushing rebellions and various plots. After he was done with these internal strife, in 335 BC he set out to conquer the world with the Balkan conquest. Soon after Persia, Egypt, Assyria, Babylonia was conquered by the skilled troops of Alexander the Great. When Alexander entered Hellespont in 334 BC he has 48,100 soldiers, 6,100 cavalry and 120 ships. Most of the warriors who fought by his side were supremely skilled Greek soldiers. The council members were childhood friends and loyal subjects. Alexander’s army was known for their shrewd and well planned maneuvers in the battlefield. They were driven towards a common goal: to conquer the world.

When Alexander’s troops set their reluctant foot on the Indian soil crossing Beas River, the scenario was completely different. The last few campaigns of Alexander were not one of glory. Most of the Greek soldiers were revolting, they ought to because most of them had not seen home for many years. The initial batch of skilled soldiers who had won swift victories were either killed in battle or they had to be sent home. The Greek soldiers were replaced by soldiers from various nationalities (Persians mainly). As a result conflicts within the troop were common. It is learned that most soldiers had asked their King to return back home after the conquest of Bactria and it was Alexander’s convincing power that forced them to cross into Indian Peninsula.

By the time Greeks under the leadership of Alexander reached India they were reduced to mere rags. There were hardly any world class soldiers, most were mercenaries and ruffians. They did not have their customary Greek military uniforms or superior equipment’s that accompanied them in the earlier campaigns. Most of the native Greeks had become lazy and arrogant after tasting the riches and luxuries of Persia and Egypt. Some of them had married native women and had a family now. So, the young men who had left Macedonia were now family men with a lot to think about. Far from thinking about world conquest, they wanted just one thing: to return home.

Battle of Hydaspes in India

When Alexander entered India he invited all the nearby chieftains to submit to his authority and resume their functions as allies. Ambhi was the first to submit to Alexander and placed himself and his forces at the Great Conquerors disposal. But the Greeks met hostilities soon after. King Porus of the Paurava kingdom, situated on the banks of Hydaspes River in modern day Punjab, was defiant and Alexander had to participate in the Battle of Hydaspes. Though Alexander won a great victory in the ensuing battle, but he lost lots of men. The guerilla warfare employed by Porus, cost lot of Greek lives. Apart from this Indian monsoons, thick forests filled with venomous snakes posed a serious threat to Alexander’s army. Diseases claimed lots of life. By the end of the war Greek troops were only a band of few hundred men.

Alexander died on the voyage back home

Apart from this rebellions were common among the surviving soldiers. Alexander was also tired from soul and his dreams were fading. He understood the logic of not moving forward. In the meantime, rumors spread among the Greek forces that there were thousands of soldiers on the other side of Ganges waiting to slay them. Nanda had a huge army, which was many times larger than Alexander’s small forces. He had the dared elephants (Greeks were quite new to the use of Elephants in battle). So, men could not be persuaded to cross the Ganges. Understanding that his dreams would have to wait, Alexander decided to return back. He gave Porus his kingdom and appointed Seleucus Nictor as the regent for India.

One thought on “Why did Alexander the Great leave his Indian Conquest Incomplete?”