Most of the readers would have heard of the great Danish king of England, Canute but not many of you would know of his father Sweyn. Sweyn Forkbeard was the first Viking King of Britain. Today, Sweyn is a forgotten king. But he ruled whole of unified Britain for 5 weeks. He became the King of Britain on Christmas Day in 1013 and ruled until his death on February 3, 1014.

Sweyn was known as the Forkbeard because of his long and divided beard. He was the son of Harald Bluetooth, the King of Denmark and supposed to have been born in 960 AD. Though Sweyn was a typical Viking warrior but he was baptized to Christianity. In character, Sweyn was a very brutal man and was well known for his violence. He started his career of violence by launching a campaign against his own father in 986 AD. Sweyn allied with another chieftain Palnatoke to attack and kill his father Harald. Once the crown of Denmark was secured, Sweyn turned his attention towards Britain. He started his Britain campaign in 990s. He moved inland through the coastal towns destroying cities and killing its inhabitants mercilessly.

Ethelred the Unready was the ruling King of Britain

Britain, back then was ruled by Ethelred the Unready (or “ill advised”). He feared that Viking invasion might take away his crown. Thus Ethelred decided to pay Sweyn a tribute and bribes. Ethelred hoped that these gifts or taxes will send Sweyn and his troops back to Denmark. Though the bribes worked for certain time, and the large Dane contingent left yet small troop was left in Britain. This small troop settled in various parts of Britain and started raiding the British countryside. Ethelred was advised by his counsel that British lands should be freed from the Dane settlements. Ethelred was convinced that this was the only way to protect England. 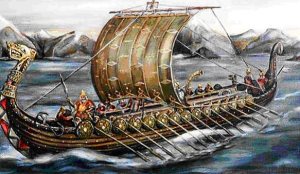 Sweyn Invaded Britain many times before being proclaimed the King

On November 13, 1002 (St, Brice’s Day) Ethelred ordered a massacre of all Danes living in England including women and children. Amongst the individuals killed in this massacre was Gunhilde, Sweyn’s sister. This enraged Sweyn and he decided to launch a second campaign to Britain. His forces again landed on English soil and started pillaging the countryside. Again King Ethelred was forced to send lavish gifts to appease the attackers. The Viking raids continued in varying scales until 1013. In 1013, Sweyn arrived with a large force and landed at Sandwich, Kent. The locals were so terrified that everyone submitted to the Danes without any resistance. After subduing the countryside, Sweyn turned his attention towards London. In London, Sweyn met stubborn resistance from Ethelred and his allies. But people within the city feared severe repercussions if they did not submit. The English Earls declared Sweyn as the king. Ethelred was forced to flee the capital.

Vikings pillaged the Countryside as they made way towards London

Following this victory, Sweyn was officially proclaimed King of Britain on Christmas Day. However, he died soon after. The reason of his death varies from one source to the other. One source suggests that one day he fell from his horse and was mortally wounded. Others suggest that he was murdered. Recently a group of archeologists have discovered human remains at Roskilde Cathedral, which was built by Harald Bluetooth. Scholars believe that the unidentified skeleton could be that of Sweyn.