Piri Reis map is considered to be one of the most interesting and beautiful maps surviving from the Great Age of Discoveries. This map was discovered in 1929 at Topkapki Serai in Istanbul when the palace was being converted into a museum of antiquities. The surviving map is only one third of the larger world map supposed to have been drawn by Piri Reis. The rest of the map has been lost in time. The map shows the eastern coast of South America, western coast of Africa and the northern coast of Antarctica. The northern coast of Antarctica has been etched with perfect details. This map is also considered to be the oldest map of Americas. Some even feels that it is a copy of the map that Christopher Columbus followed on his travels. Piri Reis map has measurements and spherical trigonometric calculations that are centuries ahead then said time period of the Piri Reis map. 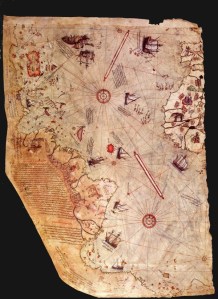 Who was Piri Reis?

Piri Reis was a famous Ottoman admiral who was born between the years 1465-70. He joined the crew of his uncle at an early age. His uncle was also an admiral in the Ottoman navy. He went around the world with his uncle for fourteen years, travelling to the coasts of Italy, Spain, North America and other islands of the Western Mediterranean. In 1513 Piri Reis returned to Gallipoli (his birthplace) after the death of his uncle. It is here that he created first of his world maps. The map was created on evidences collected by Piri during his naval expeditions. He collected notes, charts and even made sketches of the places he visited. Though in the present times some scholars feel he had access to the Imperial Library in Constantinople and he collected a lot of evidence from there. In 1528 Piri created his second world map. In 1554 when he was in his eighties he was beheaded by orders of the Sultan. Sultan issued such an order as Piri was reported to have fled from the war which the Turks lost against the Portuguese. After beheading him all his possessions were brought to Topkapki Palace in front of the Sultan.

There is not much of a mystery in the information mentioned above. But the mystery starts with Piri Reis’s depiction of Antarctica. There was accurate depiction of a continent some 300 years before it was discovered. In fact all the land masses mentioned in the map are accurate. But there is only one issue. In the Piri Reis map Antarctica coastline has been depicted as ice free. But every study concludes that Antarctica coastline or Queen Maud Land was ice free only as early as 4000 B.C. So mystery unfolds.

Modern Interpretation of Antarctica according to Piri Reis' Map

Scientists have confirmed that Antarctica was ice free millions of years ago. So did Piri Reis commit a mistake or was the map drawn before ice covered Antarctica? Many believe that the map could not be drawn millions of years ago as there was no evidence of mankind back then. Research has further revealed that Antarctica was totally ice free about 6000 years ago. So was there another civilization that knew the modern skills of drawing a map?

Earliest civilization we know of is the Sumerians but they did not exist anywhere close to 6000 years ago. Some of the Sumerian texts depict their ancestors as god like people having supreme skills. In the recent past there has been a debate about the existence of advanced human civilization before the great deluge. Some scholars feel that Piri Reis found one such map or antiquity during his expeditions; he must have used that map as a reference to construct his own. Others feel that the map was not drawn by Piri Reis at all; it was work of some advanced civilization. There are many other mysterious facts in the map:

Piri Reis map seems to be much ahead of the times; many scholars feel that the exact locations and style of mapping followed in this map could not have been possible in fifteenth century Europe. Thus most scholars claim that Piri Reis map is from time much before the known civilization and created by men using advanced technologies.