On my latest trip to Darjeeling in Gorkhaland I came across an unidentified statue in the pristine location of Mall. I was totally unaware of who this person was and why was his statue situated at such an important location. I was quickly informed by my wife that the person was Bhanubhakta Acharya, great Nepali poet. But hunger for more information led me to perform some research in this person.

Scenic Location of Mall in Darjeeling

Born in 1814 when the Nepalese language was still in its infancy, Bhanubhakta Acharya developed the language considerably and led to awareness about the great Hindu epics and other texts among the local people. Most notable of his works is the translation of the great epic “Ramayana” which was named as “Bhanubhaktey Ramayan”. He was born to a Brahmin family in Tanahu and received sound education from his grandfather who had a religious bent of mind.

Though the Nepalese language had evolved since the fall of the Khus Empire in the fifteenth century yet their language was limited to speech only. Most of the written texts were found in Sanskrit. Only the Brahmins had the right to study the religious texts as they were the enlightened ones. Even when the lengthy Sanskrit texts were read out to the common Nepali people they could not decipher the meaning. Thus Nepal was shrouded by ignorance. It was Bhanubhakta Acharya who decided to make the texts and poetry available to the laymen. He was instrumental in popularizing the written form of Khas language.

Bhanubhakta’s writings helped the children to begin their education with the light epics such as the “Ramayana” and then graduate to more complex text such as “Upanishads” and “Vedas”. Ram’s heroics especially inspired Bhanubhakta and it is due to his influence that Ram is considered with such reverence in the hills of Nepal and Gorkhaland even today. As Bhanubhakta never received any Western education thus his works have a rich Nepali flavour which many other predecessors were not able to emulate. After reading through the first few lines of the Ramayana written by Bhanubhakta you will be able to feel the Nepal in it.

As the story goes round, Bhanubhakta was wealthy Sanskrit scholar going about his life when he met a grass cutter. After interacting with the grass cutter he felt sad at the ignorance and poverty in which his people live in. Thus he wanted to do something that would make him a memorable name in Nepal long after his death. Thus he started translating as well as writing text in Khas. 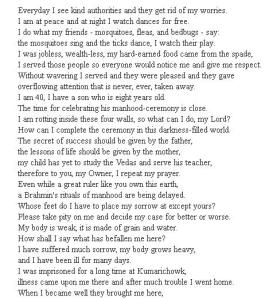 Letter Written to the Prime Minister

Apart from his well known “Bhanubhaktey Ramayan” he has also written many poems that bring out the true essence of life on the hills. One of his memorable poems was written in the form of a letter to the prime minister from the prison. Fact of the story there was some misunderstanding which led to Bhanubhakta signing wrong documents. He was made a scapegoat and thrown into the prison. For a long period his case was not heard so he decided to write to the minister pleading for his freedom.

Bhanubhakta Acharya died in 1868 at the age of 54 years. As his works were not published during his lifetime, he received no credits. His works were published by Moti Ram Bhatta in 1887. After his death he is popularly known as “Nepalka Adikavi” (Nepal’s original poet). Bhanujayanti, which commemorates the birthday of Bhanubhkata is celebrated each year on July 13.