Tongatapu is the southernmost island of Tonga where megalithic remains from a lost city known as Mu’a have been found. Most impressive of these remains is a massive stone trilithon known as Ha’amonga Maui which means the Arch or Burden of Maui. It is assumed that an empire of pottery making people spanning across the western Pacific had made these megaliths which are popular in Tonga. These people also created the megaliths of Tonga, including the building of Mu’a (now a lost city) and Great Trilithon of Tonga. The megalithic structure consists of two upright stones which are supported by a horizontal slab creating the looks of an impressive archway. Several platforms, well constructed harbor, pyramids and a road system all suggest  that a highly evolved civilization had their base in this island. There are various questions about how these structures were built and reasons for the abandonment of the lost city of Mu’a. 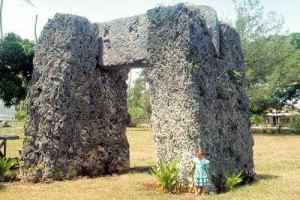 Tonga or the Kingdom of Tonga is an archipelago in the South of Pacific Ocean. It comprises of 176 islands scattered over a span of 700,000 square kilometers in the South Pacific. Tonga was colonized by a group of Austronesian speaking people around 1500-1000 BC. Not much about Tonga is known before European colonization due to lack of writing and documentation system. What remains is some oral history which the Europeans penned down. First Dutch vessel arrived in Tonga in 1616.

However the pottery remains found on Tongatapu are similar to those found in some islands of Melanesia. They have been identified with the Lapita people (Austronesian speaking group of people), who introduced Polynesian culture to the Tongans. Several evidences found in Tongatapu indicates that it was a central naval base for a Pan Pacific empire that existed within these islands for several thousand years and had come to a demise shortly before the European contact. Power of the Mu’a lay in its natural harbor which capacitated a huge fleet of vessels. The captains of Mu’a navigated to various islands in the Pacific Ocean. Tongatapu, meaning “Sacred Tonga” or “Sacred South”, was the capital of the glorious Sun Empire. While Mu’s was the governmental port city, Haketa which is located nearby on the otherhand (where the Ha’amonga Trilithon stands) was a university of astronomy, climatology, navigation and theological history. The empire traded with other powerful countries within the Pacific area such as North and South America.

Place for Small Canoes and overlooking the attacks by enemies

There has been many speculations regarding the purpose of Ha’amonga trilithon. While some feel it is a gateway to the royal compound others attach some mythical purposes similar to the Stonehenge. King of Tonga Taufa’ahau Tupou IV came up with another theory in 1967 according to which the monument had some astronomical significance too. In the local myth Ha’amonga is believed to have been created by demi god Maui as the stones were too large for humans to handle. The word ha’amonga however means “a stick with loads on both ends carried over the shoulder”.

There was a central area surrounding a huge canal in Mu’a which seems to have offered shelter for smaller canoes and protection from advancing armies. There are huge stones at the ancient port that pay evidence that immense transoceanic vessels were docked here at ancient times. Though most of the pyramids in Tonga have overgrown trees and bushes appearing from the cracks but expert masonry can be seen in the Tauhala Stone. Several evidences suggest that rise in the land level made their system ineffective and this lead to the demise of this prominent empire. Some of the nearby empires might have also added to their decline.