Catatumbo lightning is indeed one of the mysterious happenings in the world. Such a unique natural phenomenon can be seen near the mouth of Catatumbo River at the mouth of Lake Maraicaibo in Venezuela. Such lightning happens due to friction between two clouds and forms an arc of voltage which spans across 5 kilometres. Such lightning are seen in the area for 140 to 160 nights each year and as many as 280 lightning discharges per hour. 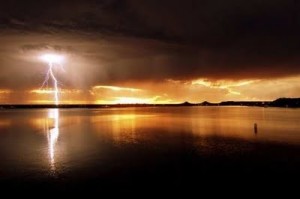 A Shot of Catatumbo Lightning

The phenomenon is seen over the marshlands where the Catatumbo River meets Lake Maraicabo. Scientists have described this as the Catatumbo lightning as “greatest single generator of ozone in the world” after judging the intensity and frequency of the discharges. There are approximately 1,176,000 lightning strikes every year in this area and they have an intensity of up to 400,000 amperes and are visible across an area of 400 kiolmetres. The storm has also been named as Maracaibo Beacon as the lightning has guided many ships in their navigation across the ages. A popular story from 1595 states that Sir Francis Drake wanted to capture the city of Maracaibo by following the storm, he thought he could manage to fool the guards of the city in the dark, but the lightning strikes gave him away. 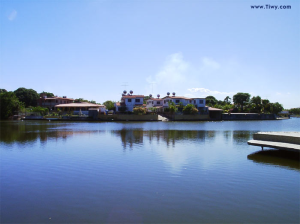 The lightning is so famous in Venezuela that it has been mentioned in the flags and appears in the coat of arms for the state of Zulia. Lake Maracaibo is found in this state. The storm is also mentioned in Zulia state’s anthem. 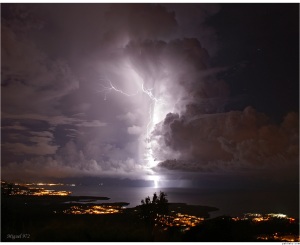 Catatumbo Lightning can be seen across 400 km

Though none of the UNESCO World Heritage sites are meteorological in nature but the Venezuelan government is pushing hard to make Catatumbo lightning the first one.

One thought on “Everlasting Storm Known as Catatumbo Lightning”