Pontius Pilate was a Roman prefect of Judaea and he is more famous (or should I say infamous) for presiding over the trial of Jesus and giving the orders for his crucifixion. According to the past accounts of his life Pilate was a Roman knight belonging to the Samnite clan of Pontii (this gave him the name Pontius). He was close to Sejanus, favourite of Roman emperor Tiberius. It was through the intervention of Sejanus that Pilate became the prefect of Judaea. His position as a prefect are confirmed by a Casarea inscription. He was always protected by Sejanus but he had incurred enmity with the Jews for insulting their religious sensibilities and insulting them. He hung the images of Roman emperor all through Jerusalem for the sake of worshipping. Upon his orders coins bearing the image of pagan religious symbols began to be minted. 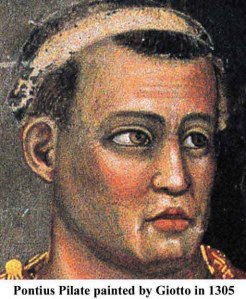 In 31 AD Sejanus fell from his position of power and this made Pilate vulnerable. He had to remain idle to survive amongst the Jews. He was under pressure due to sharp criticisms from the Jews. The Jews in their turn capitalized this vulnerability and obtained the death sentence of Jesus. It was not long after that Samaritans reported about Pilate to Vitellius (who was the Legate of Syria), when the former attacked Mount Gerizim in 36 AD. He was asked to come back to Rome. In Rome he was charged and stood trial against charges of oppression, cruelty and executing men without proper trials. It is known that Pilate killed himself in 39 AD on orders from the Roman emperor Caligula.

It is a pity that the judgements of Pilate have to be made on the basis later Jewish or early Christian writings such as Josephus and the New Testament. Josephus’ reference of Pilate seems to be consistent. He is depicted as a strict, authoritarian and headstrong Roman leader who had both practicality and rationality but never knew how far he should go in any given situation. He started out a riot between Samaritans and Jews. He tried to abolish the privileges enjoyed by the Jews. Pilate ordered the troops to set camp in Jerusalem and sent images of the emperor attached against their banners. When the Jews demonstrated in Caesarea or Pilate’s city of residence he threatened to kill them unless they stopped demonstrations. When the Jews showed readiness to die for their cause he had the images removed. Josephus concludes that Pilate has inferential judgement that could be affected by firm resolution. 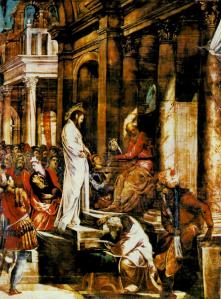 Even the New Testament suggests that Pilate had a weak and vacillating personality. He decided to crucify Jesus and pardon Barabbas just to please the Jewish mass. Soon his wife told him about her dream and Pilate transferred his responsibility to the emperor. Though it is known that Pilate was later remorseful of Jesus’ crucifixion and even took up Christianity and became saint.

All that can be said is Pontius Pilate was more a victim of the circumstances and a weak character man then being cruel or biased.

3 thoughts on “Pontius Pilate: A Cruel Roman or Victim of Circumstances?”