Hagia Sophia is one of the revered buildings in the world. There are few buildings constructed in the 6th century that are still used. It was the jewel in the crown of two great long lasting Empire – Ottoman and Byzantine Empires. There is no other building in the world that has served as the headquarters of Sunni Islam (it was the seat of the Caliphate) and previously the seat of Orthodox Christianity. Hagia Sophia is unique in whatever way you look upon it. It has been converted into a museum now. The building was named after Sophia (meaning Holy Wisdom) and reaches back to the times before Christianity. The present structure was perhaps inaugurated on December 27, 537 AD. Hagia Sophia has survived many earthquakes, wars and riots. But there is a big mystery that lies hidden beneath this famous building.

This is the only building which was designed as a church and yet does not have extensive underground areas, whether it is burial chambers, crypts or catacombs. The original Hagia Sophia church was inaugurated back on February 15, 360 AD. It was the biggest church in the new Roman capital of Constantinople. Other churches constructed during this time such as Church of the Holy Sepulchre in Jerusalem (326-330 AD) and Old St. Peter’s in Rome (330-360 AD) have extensive underground areas. Crypt is an integral part of the design of any great church. Crypts are used to bury a Christian figure or some martyrs. For most other churches the underground areas are the most sacred parts of the building. But it is very mysterious why the Hagia Sophia does not have any  underground areas apart from a few underground tunnels. 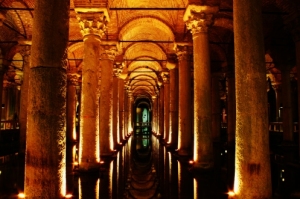 Did the famous designers of this building, Isidore of Miletus and Anthemius of Tralles forget these underground areas while chalking their designs? Judging their reputation hardly can this be a fact. May be the underground areas were sealed off at a later date. On May 29, 1453 Hagia Sophia fell to the Ottoman Turks when Constantinople fell. Constantine XI also wrote to the Pope that he had to surrender the city as there was not much aid coming from the West. But why would someone seal the underground areas?

There may have been many Greek Orthodox treasures in this building. Hagia Sophia was looted in 1204 during the Fourth Crusade. But most of Orthodox relics were restored back in 1261. These were icons of a faith and the followers never wanted them to fall in the hands of the Muslim invaders. Some of the items were even believed to have been infused with miraculous powers. So, when the Ottoman’s stormed into the city all these items were filled into the underground area and sealed off.

Second reason could be the outbreak of Black Death during the Ottoman capture of the city. Black Death was one of the most destructive epidemics to have struck humanity. This epidemic struck large European cities in 1350. Black Death arrived in Constantinople early because of the Crimean contacts. About fifty percent population of the city was wiped out by the epidemic, including the son of a Byzantine Emperor. Underground areas beneath the church were one of the areas to bury senior members, aristocracy and clergies affected by the Black Death. Underground areas of Hagia Sophia could have been filled with corpses of victims. After Ottoman annexation, Ak Semseddin who was the Sufi instructor of Mehmed the Conqueror could have suggested the sealing of the underground areas. Ak was a physician of repute and knew that contact with the affected corpses could lead further loss of lives.

But the definite reasons are still unknown as there hasn’t been much research about this rather strange mystery.